Will Spain Quit The Euro First?

Regular readers of Planet Ponzi will remember that I’ve got a thing about inflation. You know: inflation is bad, printing money makes more of it, isn’t it about time we stopped making a bad problem worse?

Trouble is, though, constant repetition of a theme gets boring after a while. Yes, fuel prices are up. Yes, asset prices are crazy.Yes, food and utility bills are weirdly expensive these days. But, same-old-same-old. So what’s Rihanna wearing these days?

But listen up. I’ve got a new illustration for you. What does €1 trillion buy you these days? Answer: it buys peace and quiet … for about six weeks. That’s how much money the ECB had lent out to weak Eurozone banks by the end of February – and six weeks is about how long the subsequent period of calm has lasted. And because inflation spirals upwards, nobody now thinks that another trillion euros will do much to ease the panic. Would a trillion euros now buy another four weeks, even? I doubt it.

And that’s the point really. There’s a difference between a circle and a death-spiral. If you’re in an infinite loop, you can in principle go on for ever. The death-spiral might look the same to begin with – the same old scenery coming round time after time – but oh boy, the ending is different.

What we saw this week might look like more of the same. A government bond auction in suddencrisis (Spain’s in this instance, though Italy’s auction was pretty ugly too.) Billions wiped from world stock markets. The euro shaking again. Global leaders saying confidently that no bailout would be needed. (Just as the bailout wasn’t needed in Greece. Until it was. Or Portugal. Or Ireland. Just as Greece could never default on its debts, until it did just that.) And a hopium rally may just follow this chatter.

Yet please don’t think of this as just another loop of the merry-go-round. It’s more than that; much more. The event which spooked the markets this week was the Spanish government’s dismally unsuccessful auction of €2.6 billion worth of bonds. That sounds like a lot of money, but Spain needs to raise €200 billion this year alone. Then again for year after year after year.

Death spiral: The Eurozone is resolute in its reality avoidance. But the nature of reality is that you can’t avoid its arrival

If the country’s finances were under control and the economy was reasonably strong, those things could be manageable. Germany also has a lot of debt – more as a proportion of its income than Spain – but the economy is strong and the government not desperately addicted to spending more than it raises. Spain, unfortunately, has a government deficit which is out of control and an economy forecast to shrink. (Forecasts which will probably turn out to be way too optimistic, by the way. The Greek economy hasn’t shrunk. It’s collapsed.)

That would be bad enough on its own but Spain had a real estate bubble even worse than our own. Even worse than the American one. And the losses stacked up in that boom are still lurking in Spain’s many small savings banks, each of which is like an undetonated bomb. A bomb, whose fuse is ticking every closer to the detonator. 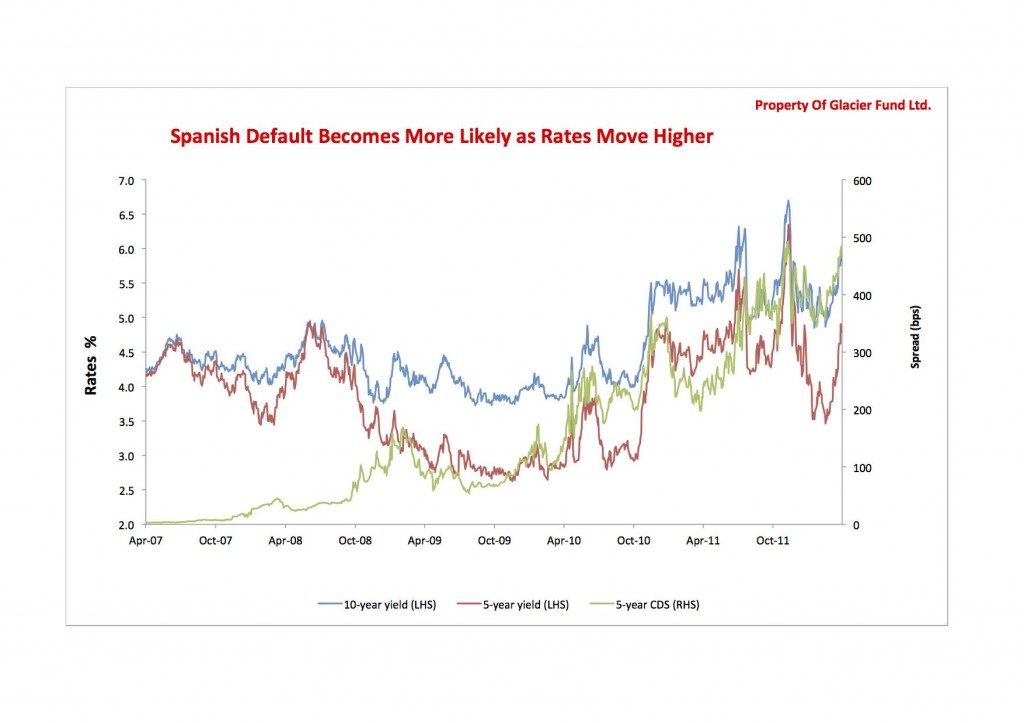 There are different ways you can respond to all this. If you have any savings or investments, you’ll be thinking about how to protect your cash. Just what do you do, when you can’t trust governments to repay their debts? What’s left? What’s safe?

There’s also a human response. Just stop to think a moment about the human tragedy implied by Spain’s worse than 50% youth unemployment. What a heart-breaking statistic that is! It reminds you that behind the cold financial stats, young people’s lives are being ruined by awful decisions made by their political masters. Worse still, those scars may never heal. Economists have found that the ‘earnings scar’ left by a bout of prolonged unemployment is visible for literally decades afterwards. And that’s just to talk about money. What about the injury to self-esteem? To pride and self-fulfilment?

Which brings one, I suppose, to a political response: the place where these considerations need to end. Politicians created this mess because they forgot the basic rule of capitalism: if you win, you win; if you lose, you lose.

Capitalism, of the sort that’s operated across Planet Ponzi these last decade or two, has played by different rules. The winners win. The losers … well, their losses get shuffled away. They get magicked away by Wall Street. They get bailed out by governments. They get printed away by the money presses of the world’s central banks.

Britain is tiptoeing uncertainly away from that awful politics right now. America hasn’t yet woken up. The Eurozone is resolute in its reality avoidance. But the nature of reality is that you can’t avoid its arrival. Clickety-clickety-click – is that dominoes I hear?

This was published in todays  Daily Mail.