Don’t be evil, just OBEY: After Covid-19 tech giants will have even more control over what you see & what you think

by Mitch Feierstein about 10 months 2 weeks ago

Silicon Valley’s algorithms are controlling your cognitive map, and Congress is letting it happen. Covid-19 is providing the perfect cover to bolster that control — just in time for the 2020 election.

Neoliberalism was the perfect cover for oligarchs to unleash ideological warfare to protect the billions they’ve plundered from taxpayers.Trillions of dollars flowed into Silicon Valley, the birthplace of digital censorship — censorship that in many ways is more dangerous and insidious than the failed coup d’état of a sitting US president with the farcical Russiagate and impeachment hoax. Over the past two decades, democratic societies have been manipulated by Silicon Valley’s unregulated big-tech behemoths, which now control the news flow and have weaponized Amazon, Facebook, Google, Twitter, YouTube, Instagram, Netflix, PayPal, Reddit, TikTok, Microsoft, Apple and the very dangerous Internet Of Things (sped along by 5G). 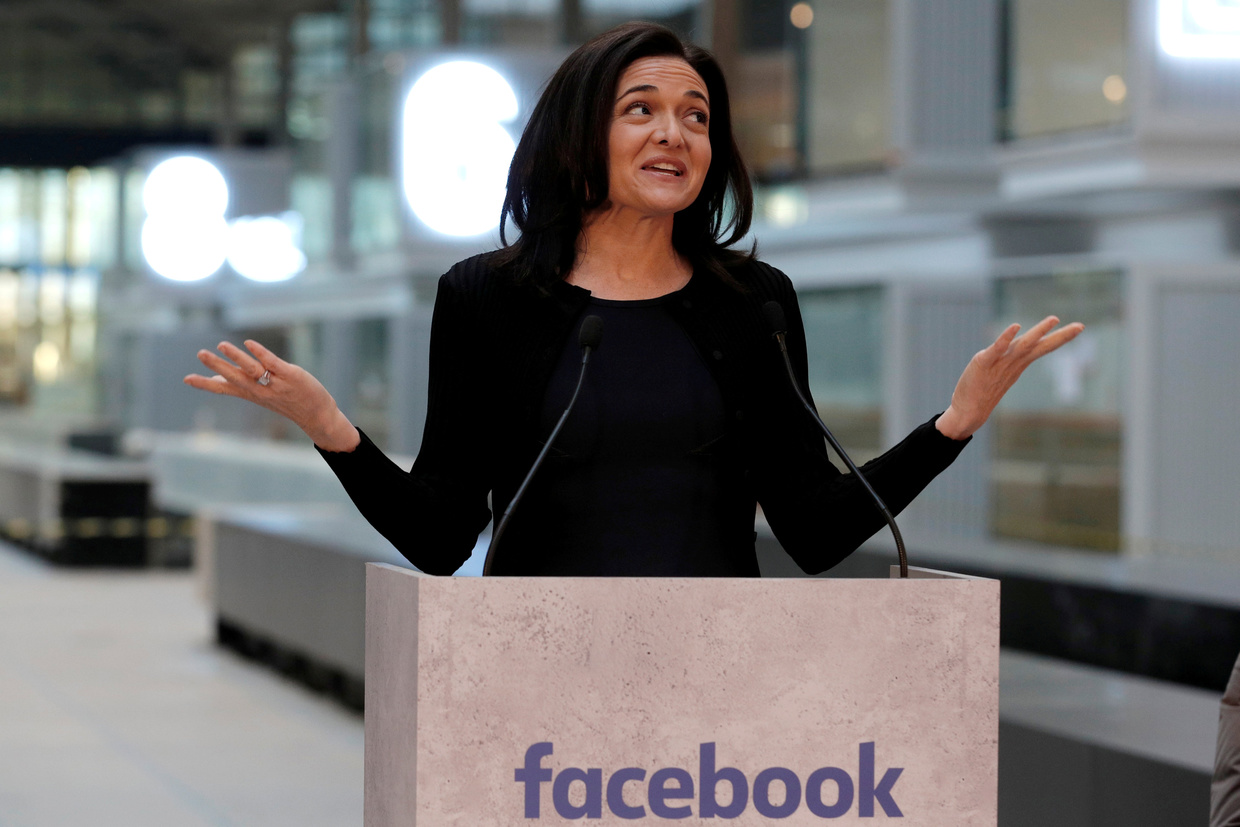 Facebook’s Sheryl Sandberg, a staunch supporter of the Clintons

Hard proof is difficult to come by since you can never catch the tech giants red-handed. The way they purposefully conceal all their data and trademark algorithms only serves to reinforce the suspicions and the scattered evidence. But their motives have long been transparent in their own public statements and actions.

Covid-19 is the perfect diversion. While Congress busily passes more trillion-dollar bailouts for billionaires, big-tech stealthily ensures future generations become digital addicts who blindly accept and embrace, like sheep, the emergence of digital tyranny. Today’s college students stumble around like zombies in a trance, eyes glued to their mobile phones, afraid to “miss out” on real-time Instagram updates or TikTok’s latest memes. The development of 5G may result in a silent WWIII that ensures a quick demise of a zombified Western society without a single shot ever being fired.

Silicon Valley’s algorithms determine what content you see, when you see it, how you see it or if you see it at all. If the shadowy, faceless “moderators” disagree with your viewpoint or it is in opposition to the official neoliberal narrative, it disappears, and you are shadowbanned. For example, I firmly believe my @PlanetPonzi Twitter feed is shadowbanned. Twitter’s CEO Jack Dorsey endorsed an article as a “Great read” in which the authors reflected how US politics have gotten so bad (under the Trump White House) that “there was no bipartisan way forward… and the country is on the cusp of a civil war.” They continued, “In this current period of American politics, at this juncture in our history, there’s no way that a bipartisan path provides the way forward.”Dorsey’s support of this article establishes a precedent allowing a toxic culture at Twitter, which was likely reflected in employees’ selection of accounts to shadowban. Vice conducted an investigation that revealed how famous conservative voices that used Twitter were consistently suppressed more than liberal accounts. Twitter never addressed the Vice results and later denied claims saying it was a mistake or that “behavior-based signals” boost the visibility of certain accounts while suppressing the visibility of others as part of Twitter’s objective “to improve the health of the public conversation on Twitter.” So to reiterate, conservative voices, including existing members of US Congress like Matt Gaetz have been suppressed on Twitter. Due to Twitter’s opaque nature, it is impossible to state that Twitter boosts individual accounts while ensuring voices the Twitter moderators disagree with are never seen, but it is highly likely. The stratospheric “click-fraud based” valuations of Silicon Valley’s profitless zombie companies remains extraordinary. Twitter’s $20-billion valuation is hilarious. Paul Singer’s Elliott Management is a brave investor to have faith and confidence in Twitter’s business model.

Another example can be found simply by looking at the comments directed toward Boris Johnson as he is sitting in hospital battling Covid-19. People are calling for his death and stating he deserves to be in this situation. Would these comments still be up if they were calling for the death of a liberal? Is it okay simply because Johnson is a conservative?

Data scientists and psychologists hold the same view. Have a look at Ronald E. Robertson’s studies on Search Engine Manipulation Effect published in the Proceedings of the National Academy of Sciences, which are fascinating and damning.

These digital gatekeepers have the power to control and manipulate populations via big-data collection. Your digital profile contains a record of everything you do. You are being tracked and all your movements and actions are recorded. This valuable data is compiled and stored by the companies listed above. This data is valuable and is based on your preferences and all the items you have searched or purchased on the internet, the stores you have visited and the places you have traveled to whether it be by car, bus, train or plane. Google, Amazon, Facebook et al. are recording your every move. All of these are, at least nominally, opt-out functions – but the companies are blatantly counting on people not being bothered enough to dig around the settings and untick all the small-script disclaimers.

Sound scary? Well, it is. What’s worse is that full control of your consumer data — and the resultant power to influence you — is combined with clearly-expressed political preferences.

“Working relationships with Google, Facebook, Apple, and other technology companies were important to us in 2012 and should be even more important to you in 2016, given their still-ascendant positions in the culture.These partnerships can bring a range of benefits to a campaign, from access to talent and prospective donors to early knowledge of beta products and invitations to participate in pilot programs. We have begun having discreet conversations with some of these companies to get a sense of their priorities for the coming cycle, but would encourage you, as soon as your technology leadership is in place, to initiate more formal discussions.”

Do you remember Google’s slogan “Don’t be evil”? Well, Google is evil. It is one of the biggest donors to Washington’s pay-to-play, feckless political class.

China commissioned Google’s Eric Schmidt to create a Chinese Social Credit System that would spy on and censor large swaths of China’s population. In response, Google employees published the following statement: “We refuse to build technologies that aid the powerful in oppressing the vulnerable, wherever they may be.” While Schmidt represented this Social Credit System as only being in the developmental stage and would not be finished for years, recent reports claim this is a total lie and that the system is fully functional.

President Obama met with Schmidt frequently, and Google had influence over Obama’s administration and policies. White House records show that between 2009 through 2015, while President Obama was in office, employees of Google and its associated entities visited the White House 427 times.

In 2016, media outlet reports suggested that Google’s search results buried bad news about Clinton and portrayed Hillary in a far more favourable light than Trump. Schmidt responded: “We have not taken a position on the American presidential election and nor do I expect us to.

In addition to Schmidt’s work on the campaign’s technology strategies, he also covertly funded a Hillary Clinton campaign vendor. In October 2016, Goff beamed in an email he sent to Clinton: “Schmidt’s word would easily eclipse the technology operation of any Clinton opponent.”

However, hopes were dashed when the world was shocked by Clinton’s unexpected loss. Why do I bring this up? Well, Google, Facebook and Silicon Valley have had four years to perfect a system that ensures their candidate will win and Trump will lose. Eric Schmidt has learned from his 2016 mistakes and has been vocally opposed to everything Trump. Schmidt is not the only one who wants Trump gone, so does 98 percent of Silicon Valley, which will ensure 2020 will be different.

Knowledge is power, and whoever controls the media, controls the information flow and controls the power. That’s how these tech companies set out to achieve a common goal: controlling your cognitive map. It’s not about what’s said and debated, it’s about what’s buried and left out.

The original version of this article was published (here)