So, the European Commission’s President Manuel Barroso says that it would be “difficult, if not impossible” for an independent Scotland to become an automatic member of the European Union. George Osborne and (worse) his senior Treasury adviser Sir Nicholas Macpherson have ruled out any likelihood of currency union. 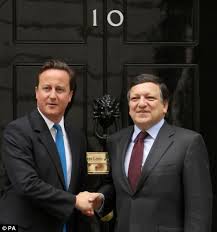 Let's secretly get rid of these silly voter referendums, deal?

These things were predictable, perhaps, though Alex Salmond must have been taken aback by the bluntness of the language. Mr Barroso was simply stating what has long been known. Spain is jumpy about any idea that its restive regions might leave for the comforting embrace of the EU. So it’s pretty much nixed the idea that Scotland would get a free pass, simply because of the precedent it would set.

And currency union is also a daffy idea. Scotland is a tiny country with a huge financial system – vastly more unbalanced than Britain’s already lopsided one. The idea that England and Wales could take on the risks of that financial system without having Scottish government and financial policy under lock and key was simply never credible. Add to that, the fact that Mr Salmond has muttered about setting up his own currency if he wasn’t happy with the pound sterling, and he has pretty much nailed an exit sign over the door in advance. Currency speculation has wrecked stronger countries and stronger unions than the one being proposed: it’s crazy for Mr Salmond himself to provide the excuse.

When Mr Salmond threatened not to pay Scotland’s share of the national debt if currency union was prohibited, he might as well have announced to the world financial markets: “Do not trust this nation’s creditworthiness.” It was an act of petulance, not rational politics.

But before we join the bash-Salmond bandwagon, shouldn’t we stop to ask two questions. One, should Scotland actually want to retain the pound? And two, should it really want to be inside the European Union? 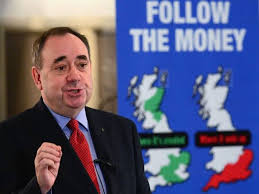 Take the first of those questions. The pound has recently seen a near-total failure of its financial system. Some of the currency’s biggest banks – hello, RBS – are still limping so badly that they are probably better understood as actually insolvent. The central bank has inflated its balance sheet to grotesque levels, despite no commensurate increase in economic production. That same central bank has no clear exit strategy – that is, it has no idea how it will mop up the vast excess of liquidity that has been created. This experimental monetary expansion has caused an asset boom in bond prices. The rise in the bond market has percolated through to the equities market (and again, this is despite the fact that economic production in the UK is still way below its pre-crash trend). Oh, and we now also have a rapidly mounting bubble in the real-estate market, which has been fanned by implausibly low interest rates and the insanity of a government-backed help to buy scheme. (Or should that be help-inflate-the-bubble taxpayer’s risk scheme?)

None of this sounds like the kind of currency that a sensible nation should be seeking. When you add on the inevitable restrictions and humiliations that would come from being a very junior partner in a shared currency, the Scots should proudly disdain the English pound. Why not have a Scottish pound, with the queen’s head on it, instead?

Ah, but critics would say, these smaller nations are at permanent risk of currency instability as their wee central banks would lack the reserves to neutralise flows of capital. A fair point, but one that’s based on a post-Bretton Woods groupthink. Our current (and fairly recent) monetary system is based on the notion of a pure fiat currency. One that has value, just because the central bank says it does and because everyone agrees to share the assumption. But it is that system which delivered the dotcom bubble, the various currency crises of the emerging markets, the housing bubble and the 2008 financial crash.

Much better would be for Scotland to revert to a modernised version of the old gold standard. Although I’m a gold nut myself – I hold plenty and expect value to continue its long-term secular increase – it’s too narrow a commodity to sustain a modern financial system. And in any case, other commodities matter too. Iron, platinum, oil, coal.

A truly modern currency would be linked – and inextricably linked – to the value of a basket of such commodities. Scotland is strong in oil, so that its currency would have a loose but natural linkage with its own economic strength. Speculators wouldn’t be able to ravage the currency, because the currency’s value would simply be determined by global markets too big for any speculator to corner or manipulate.

And best of all, the currency would be protected from the unwelcome “protections” of the central bank. You couldn’t get asset bubbles being fanned by generous regulators. If the economy was running too hard, the government would have to take the necessary tough political action to damp activity in exactly the way governments ought to: raising taxes, paying down debt, saving up for a rainy day. If the economy had too much slack, government, not the central bank, would be responsible for taking the steps needed to regenerate growth. Action would happen where it ought to happen and would lie in the hands of elected politicians who would need to explain and justify their actions to the electorate.

As for the EU, who needs it? The union was born in an era of high tariff barriers and was an effective solution to the needs of the day. We live now in an age of vastly reduced tariffs and other barriers to trade. The World Trade Organisation enforces rules that embrace not simply every member of the EU, but crucial trading partners such as the US and China. Scotland could set its own immigration rules, its own labour laws, its own regulatory system. For sure, it would often want to copy the European model – for legislative simplicity, if nothing else – but it would have a choice that would be made and defended by its elected politicians.

One last thing. The Scottish people are, wisely, wondering what their economic future would be like once the oil has run out. What industry would replace it? I’d suggest that the rise of the Bitcoin has taught us an interesting lesson. For sure, the currency is weird, it has been heavily involved in drug sales and the like. It’s hardly the kind of thing a new nation should want to emulate. But the rise of the Bitcoin proves how desperate investors are for real money. A currency that stands beyond the reach of a central bank, beyond the clutches of our increasingly Ponzified financial system. A well-designed, commodity-backed currency would be beloved of investors and Edinburgh and Glasgow would be the natural home of those institutions who want to deal in it.

Oil? Phooey. Oil is for a generation. Commodities are for life.