by Mitch Feierstein about 8 years 8 months ago

At the last election, during a TV debate between the three putative chancellors (Messrs Darling, Osborne and Cable), Krishna Guru-Murthy, asked, ‘Do you agree that cuts we are going to be facing will be deeper than the cuts that Mrs. Thatcher had to put through Britain?’ Alastair Darling answered, ‘Well, … they’re going to have to be pretty deep.’ The other two men simply said, ‘The answer is yes.’ 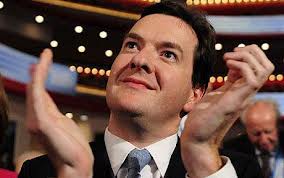 The economic realism of that (brief) period wasn’t simply about cutting government spending. It also had to do with the kind of economy we wanted to see. No longer one dependent on property, finance and borrowing, but one which would be led by industry, investment and exports. If the coalition government had walked that talk, the British economy would be on the road to real recovery. A long, arduous and stony road, for sure, but still: one heading in the right direction.

Alas, however, that road proved too stony, too steep. After some real world setbacks (Eurozone recession, a poor manufacturing performance) and predictable political hiccups (the rise of UKIP, some backbench restiveness), Osborne has, in effect, chosen to revert to the economics of fakery.

You can map that abdication in a number of ways, but the clearest signpost is the nonsense of the government’s help to buy scheme. Every single thing about that plan is terrible, starting with its basic premise. An interest free government loan guaranteed by taxpayers is intended to make it easier for buyers to raise a deposit, so that buyers can purchase homes after finding as little as 5% of a home’s purchase price.

The first obvious point to make is that the scheme does nothing to increase the supply of properties. Britain already has the smallest homes in Europe. Our planning rules are so restrictive that house builders are resorting to ever more marginal brownfield sites. No new towns are being planned. The old Green Belt rules are still enforced, no matter how antiquated they now seem. Investment in mass transit schemes and high-speed rail (which could link more areas to the prosperous south-east) are being squeezed by budget cuts. In short, nothing that would make a real-world difference is being done.

Since supply is restricted, easing the financial challenge of property ownership can only lead to higher prices. Those higher prices are artificial (based on government subsidy) and make the prospect of a housing crash ever more certain – because at some stage, interest rates will need to come back to normal levels and government will have to stop wasting cash on meaningless subsidies. Since we’ve already lived through the consequences of one boom and bust, it seems astonishing that we should choose to re-awake those evil genies.

The problems don’t end there. Higher house prices don’t just mean a greater likelihood of a crash, it also means that, yet again, the government is deliberately using debt as a growth strategey. Indeed, the basic design is, as I’ve argued in my book Planet Ponzi, simply a Ponzi scheme designed by government. You take an already overvalued asset (housing), throw a load of debt at it (mortgages in the household sector, guarantees in the government one), keep the merry-go-round moving (by keeping house prices on the up), then get re-elected before the whole thing collapses.

The trouble with these things is not just that they always collapse, but that the problems escalate all the time. In the US, the federal government used to be in the business of guaranteeing mortgages. When the solids hit the air-conditioning in 2008, the US Treasury ended up committing $187 billion in saving the two main agencies (Fannie Mae and Freddie Mac) from collapse. Osborne’s scheme is smaller than that, but it’s heading the same way. It’s built on the same disastrous foundations.

Indeed, the single worst thing about the whole scheme is the thinking behind it. The United Kingdom currently ranks 159th of 173 countries in terms of investment as a share of GDP. We’re outranked by nations such as Mali and Guatemala. Spending on machinery has fallen by a third since 2008. That lack of investment squeezes output today and restricts the economy of the future. It’s an economic catastrophe unfolding in slo-mo in front of our eyes.

And certainly, solving those problems would be hard – but those issues really, really matter. In choosing to chase the wrong target, in the wrong way, Osborne has shown where his priorities really lie: the good of his party, not the good of his country. Shame on him.