There’s a theory that you can’t trust any message conveyed by a person’s most public expressions and gestures. Instead, the theory runs, you have to study the fleeting look, the involuntary movement. The micro-expression that lasts a second or two, before the welcome smile is fixed in place.

That theory sounds good to me — plausible enough that I wonder if you can apply it more broadly: If, for example, you can look at the unscripted remarks of politicians and deduce the real truth. I’ll give the theory a run in the United States when the election campaign heats up, but for now let’s give it a practice outing in France — just days before that country goes to the polls.

First up, some background. France is slap-bang in the middle of the Eurozone crisis. Its government deficit isn’t appalling — or at least, not appalling by U.S. or Spanish standards, which admittedly doesn’t set the bar too high. On the other hand, France’s debt-to-GDP ratio is a scary 86 percent. If you add on all its other undeclared liabilities (pensions, EU obligations, and so on), the ratio is way over 150 percent. And France has run a budget deficit for more than 30 years.

France also has some big international banks. Those banks are active in Spain (where the financial prospects are awful), Italy (no better) and indeed the emerging economies of Eastern Europe. If and when one of those institutions hits a major stone in the road, the French government will have the choice between watching a massive lender fail or putting its own financial solvency on the line. Either way, the fiscal impact will be horrendous.

So: scary times. Scary enough that you’d want and expect some somber honesty from politicians. But no. Nothing of the sort. The man most likely to win, Francois Hollande, has come up with a brew of policies — lowered pension age, new public sector hires, a tax on the rich that may touch 90 percent or more — that collectively have the feel of some retro 1970s-themed party, all disco balls and facial hair.

That policy cocktail didn’t work in the ’70s. It brought rocketing inflation, stagnant growth, collapsing exchange rates and public protest. And these days, the climate is far less propitious than it was. There’s more trade, China is fiercely competitive, the bond markets more open and less deferential and rampaging technological change (notably the Internet) has utterly altered the interconnectedness of markets. Meantime, France has lost control of its own currency. It can’t even print its way out of trouble.

So what does our study of the unscripted remarks of politicians tell us? Well, we may as well note straight away that it’s going to tell us more than a study of their scripted ones. Back when Sarkozy first ran for the presidency, he spoke it like he was for real. “Merit and labor should be rewarded more and more,” he said. “Globalization requires us to reinvent everything.” He spoke of a “rupture” with the past. He sounded like a French Thatcher.

Since he hasn’t, even remotely, governed that way, we may as well study the unscripted. And we start with a little room for optimism. Asked by journalists if Italy could repay its debts, he laughed out loud. Not as in a “of course it can, don’t be silly” way, but in an “Are you joking? It’s Italy!” way. That’s truthful, if hardly diplomatic. 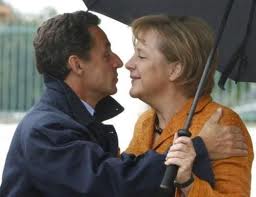 Ohhh la la I know you will help me get re-elected if I help you ... baisers..

But Sarkozy’s tendency to honesty doesn’t seem to extend as far as an appetite for debate. Given a hard ride by some journalists in relation to a major current corruption scandal — hardly a topic that journalists ought to avoid — Sarkozy raged at them. Turning to one journalist, he said, “And you! I’ve no evidence against you. But it would seem you’re a pedophile. Who told me? I have an absolute conviction.” His diatribe lasted for 10 minutes, during which time he kept returning to his ugly analogy — then stormed off saying, “See you tomorrow, pedophile friends.” Nor is it just journalists he treats with disdain. He once told David Cameron, the British prime minister, that he had “lost a good opportunity to shut up.”

Voters get the same treatment. When a man refused a handshake at a French agricultural fair, Sarkozy snapped, “Casse-toi, alors pauvre con.” (You’ll need to translate that one for yourself. Just be warned that the BBC’s family-friendly version — “get lost then, you bloody idiot” — is not exactly word-for-word.)

Worse still, the man’s basic untruthfulness pertains even when it comes to the financial crisis — the issue which is (or should be) dominating French politics. Asked repeatedly by Spanish journalists about the effect of S&P’s downgrading of the French credit rating, Sarkozy twice refused to answer at all before stating abruptly that it “changes nothing.”

Truth is, if you want the most telling micro-expression of all, you could do worse than consider Christine Lagarde, former French Finance Minister and current head of the IMF. At a talk in Davos she held up her capacious Louis Vuitton bag and said, “I am here, with my little bag, to collect a bit of money.” It was a joke … only not. Her remark comes too close to the truth to be funny.

Show me the money!

And one other thing. When a political culture refuses to engage with journalists, which disdains voters, which act aggressively or dismissively towards close neighbors and allies — that culture has a rottenness at its heart. A rottenness that extends to corruption on an industrial scale. There have, in recent times, been major scandals touching presidents (Chirac, Sarkozy), prime ministers (de Villepin), high-profile ministers and political figures (Dominique Strauss-Kahn, Pasqua, Jean-Christophe Mitterrand, Lagarde). Not all those scandals are equally significant. Some of the investigations are still in process and all those involved have denied their involvement.

And yet. “Casse-toi, alors pauvre con,” is not something you say if you respect voters. And if you lose respect for the people who elect you, everything else follows. A political class that lines its pockets as the great ship of France founders on the rocks.

One Responses to President Sarkozy to Press: ‘See You Tomorrow, Pedophile Friends’