by Mitch Feierstein about 5 years 7 months ago

Has the out-of-control cabal of central banks inflated grotesque asset bubbles in global property, stock, and fixed-income markets? Or are we to believe traditional media’s “fake news” mantra of “it’s different this time?” 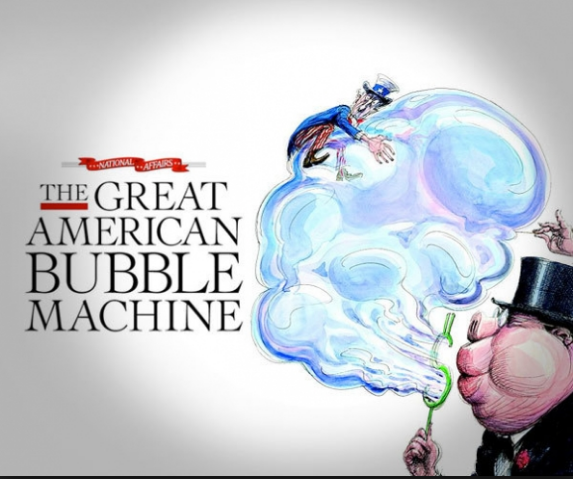 Capitalism is being destroyed

The US Federal Reserve, the Bank of England, and the European Central Bank have become gargantuan, out-of-control, rogue hedge funds. They are loaded with non-elected academics operating in opaque groupthink bubble chambers repeating the broken Keynesian economic mantra of “whatever it takes, more debt is good.”

They have magicked-up 100s of trillions in debt and guarantees while the US Federal Reserve has gobbled up over 90 percent of the US mortgage market. Global stock market valuations are buoyed by stock buybacks, funded by record corporate debt, and enabled by reckless central bank zero-interest-rate policies.

Pay no attention to the fact that in the past few years, US stock indices have surged over 70 percent to new all-time highs while profits have only risen an anemic 2 percent.

Today’s record amount of corporate debt is cannibalizing corporations by bringing future earnings forward which makes future stagnation and collapse into bankruptcy a certainty. For the near term, CEOs will continue to receive record pay packets for out-preforming the market as their stock prices bubble like a rocket ship into outer space while these actions decimate any long-term growth prospects.

In 2005, preceding the credit crisis and the subsequent nationwide property price collapse, US Federal Reserve Chairman Dr. Ben Bernanke was asked about risks associated with a dangerous subprime housing bubble that could destabilize the economy. Bernanke stated that, “I disagree with your premise. We’ve never had a decline in house prices on a nationwide basis. So, what I think is more likely is that house prices will slow, maybe stabilize: might slow consumption spending a bit. I don’t think it’s going to drive the economy too far from its full employment path, though.”

So, what led to history’s biggest financial crisis in 2006? Too much debt, credit, and leverage—proving that Fed Chair Ben Bernanke was dead wrong. What did we learn? Nothing, a big fat zero. In fact, property prices have recently eclipsed previous 2006 highs, bubbling to frothy new all-time highs while real wages declined and high-paying jobs have disappeared.

Real estate is an asset but not an asset class because it lacks liquidity. It takes time to sell property and the difference between what a buyer is willing to pay and what a seller is willing to sell for may be HUGE. For example, a buyer may be willing to pay $750,000, but the seller will only sell at $900,000.

In good times, frenzied buyers create “bidding wars” on coveted properties sometimes rocketing the price 30 percent above the original offer. This is terrific if you are a property owner or property seller, but not so much if you are a first-time buyer. In bad times, prices collapse and the only price a buyer is willing to pay for the $900,000 home above is $90,000. Great for buyers, but not so great for the owner who holds a mortgage of $700,000 that must be repaid to a bank.

During these BOOM times, optimism bias creeps into the minds of buyers allowing them to pay off the charts, wildly inflated, irrational prices for fear of “missing out.” Optimism bias is a cognitive bias that causes a person to (mistakenly) believe nothing negative could ever happen to them. It is a “close your eyes and buy at new all-time highs” belief system.

Why are these asset bubbles continuing to grow? The blame can be placed on the central banks. They are destroying natural market pricing mechanisms (i.e., capitalism) by engaging in currency and stock manipulation. They are purchasing massive amounts of corporate debt as well as selling off their local currency and buying US stocks denominated in US dollars.

This pushes down their local currency, making their exports more attractive, and increases the US dollar stock price allowing the central bank to make a tidy profit on their long US stock and long USD positions. The Swiss National Bank, the Bank of Japan, and the People’s Bank of China are buying massive amounts of stocks.

And it’s not just emerging markets. Between 2008 and 2009, the value of Great Britain’s pound (GBP) plummeted by over 30 percent Vs. US dollars, and in 2014 the Euro lost 25 percent of its value against the US dollar.

The central banks’ policies of asset inflation, money printing, currency manipulation, and most importantly exporting inflation to the emerging markets are to blame for these currency wars but the financial media’s propaganda bullhorn would rather blame BREXIT, Trump, or Putin for these losses.

The central banks’ monetary policies have only succeeded in creating the most debt in history while enabling irrational valuations in commercial and residential real estate as well as in the stock and bond markets. Monetary policy has failed to create economic growth and the unintended consequences of these actions have sparked an epic currency war destroying emerging markets with excessive US dollar debt and debased currencies. The currency wars and exporting inflation are the elephants in the room that no one is talking about.

This will lead to trade wars and end with a catastrophic global financial crisis or, even worse, a world war.