Morgan Freeman, you are a disgrace!

by Mitch Feierstein about 3 years 8 months ago 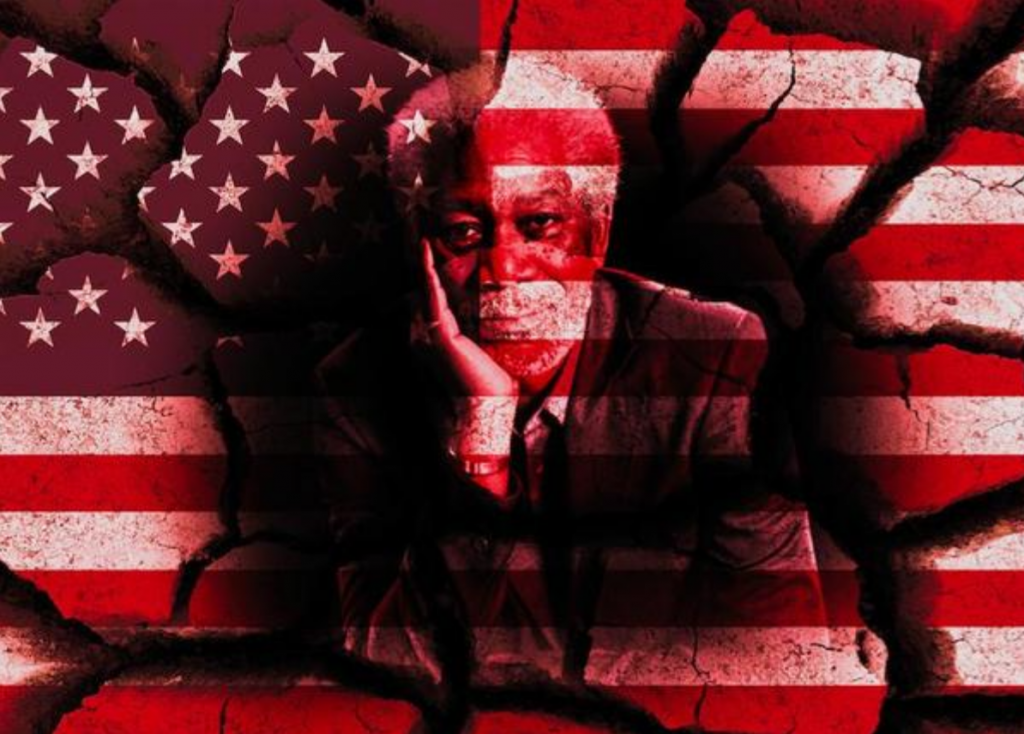 Rob Reiner’s latest propaganda film “Committee to Investigate Russia” is so outrageous that it would make Joseph Goebbels, the Nazi’s head of propaganda and enlightenment, blush bright red.

There is zero evidence to substantiate Morgan Freeman’s claims about the Russian government, let alone anything linking President Donald Trump. Why should we believe the liberal fake-news media, partisan politicians, and virtue-signaling Hollywood celebrities as they shriek, “the Russians did it” without any facts, evidence, or credibility? Reiner seeks to instill fear and hate by casting God, aka actor Morgan Freeman, and adopting the neoconservatives’ line that America has been attacked and is at war with Russia (the only other nuclear superpower in the world).

The danger of this McCarthyesque rhetoric and the escalation of a Russian Cold War 2.0 presents an existential threat to our way of life. Freeman’s weaponized package of disingenuous lies is risible!

Perhaps, one of the most ludicrous claims Freeman makes is “The free world is counting on the U.S. for leadership.” Really? Is this the same leadership that resulted in the United States and its allies bringing “democracy” to Iraq, Libya, Syria, Yemen, and Palestine? It seems our foreign policy of endless wars everywhere on the globe and creating failed states which become launch pads for terrorism only further the goals of a gargantuan shadow government and the military-industrial complex which, from the shadows, pulls the strings in Washington’s pay-to-play cesspool of corruption. 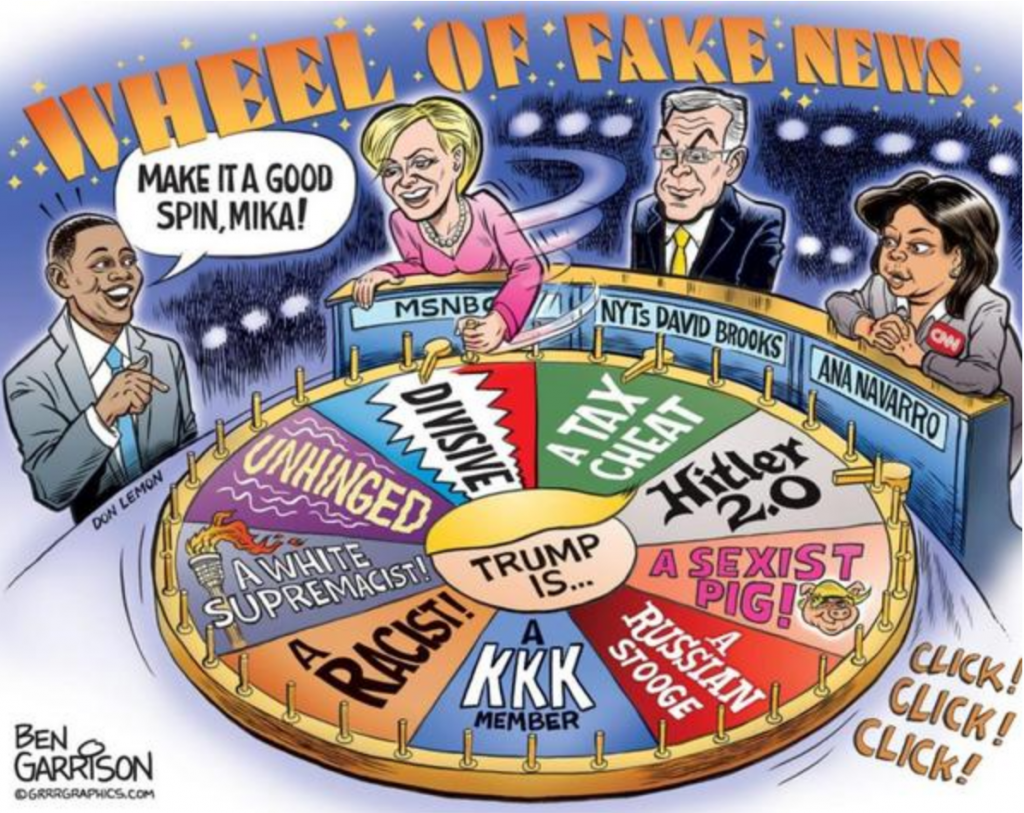 Reiner has fallen from grace and hasn’t been relevant for the past 10 years in Hollywood. He is Hollywood’s latest B-list celebrity to reinvent himself by transitioning from a failed film director to a populist patsy for Clinton and Obama’s Deep State shadow government, which is aimed at delegitimizing our government — all to the cheers of the uber-liberal media.

Right after President Trump’s inauguration, Reiner called for an “all-out war” to delegitimize the election. “The fight to save Democracy is now an all-out war. U.S., stay strong. We have somebody who’s mentally unstable, who is a pathological liar. There’s no getting around that, who’s running our country.”

The title, “Committee to Investigate Russia,” sounds official — almost like a quasi-government operation. To be sure, no expense was spared enlisting Hollywood’s A-list of high quality, U.S.-flag-waving graphic designers to hoodwink the public into believing the unsubstantiated claims spewed by Freeman in Reiner’s propaganda film. This film is a campaign designed to usurp democracy by committing a bloodless coup d’état of the democratically elected government.

And the “Committee to Investigate Russia” is not the only action the liberal elite have taken to undermine the president’s administration. The liberal media has normalized people hurling threats of violence and even death at Trump and his family. Let’s just take as an example the most recent death threats against the president from the likes of Johnny Depp, Kathy Griffin, Madonna, Snoop Dogg, Charlie Sheen, and Mickey Rourke.

For another example, take a look at this summer’s play in Central Park where the liberal actors seemingly glorified the killing of Trump. Just last week, celebrity chef Anthony Bourdain said he would poison Trump. If someone ever did this to Hollywood’s darling Barack Obama, the roof would cave in on them and they would be immediately shipped to Camp X-Ray in Guantanamo Bay, Cuba for reprogramming.

Never in the history of the USA has the liberal media and Hollywood normalized behaviors that found it acceptable to wish for the death of a democratically elected sitting president.

Many Americans are fed up with the politicization of ESPN, with the Hollywood elites, and with their lapdog media. Colbert’s Emmy Awards show was a perfect example of this celebrity bubble. The show received the lowest ratings in 69 years and was not at all indicative of what America thinks. It was a bunch of America’s wealthiest self-congratulatory, pompous, arrogant egomaniacal celebrities praising and celebrating themselves. No wonder populism has reached new heights in America. 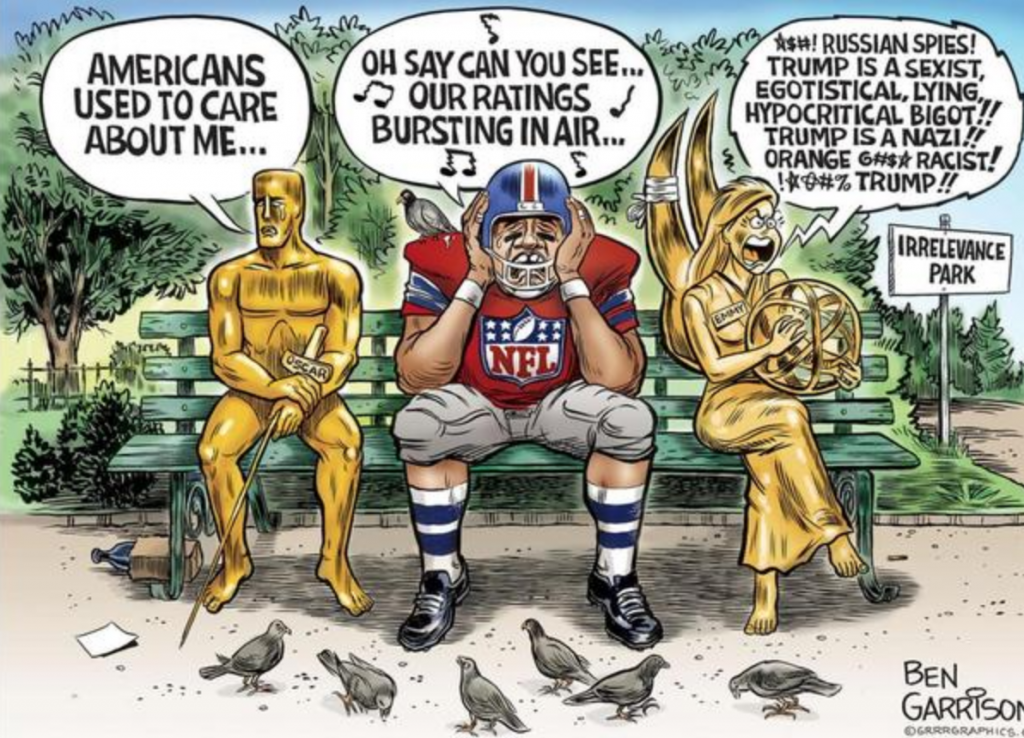 And it’s not just the Hollywood elites. The CIA has been in bed with Hollywood for many years and has been conducting psychological operations on the American public. Who better to star in this propaganda film than James Clapper, Washington’s swamp monster? Remember him? He committed perjury while testifying before Congress. Clapper emphatically denied that U.S. spy agencies were collecting illegal information on Americans. Even worse, much worse, there were FISA warrants issued to conduct surveillance on political opponents, and it’s likely our FBI and deep-state security apparatus colluded with the writer of the Steele dossier. President Obama’s administration even conducted illegal surveillance on President Trump’s campaign by having Trump Tower bugged.

Rather than prosecuting or firing Clapper, Obama promoted him for being a loyal propagandist and liar. Hillary Clinton, James Clapper, James Comey, and Loretta Lynch are all examples of “too big to prosecute” elites committing crimes against democracy with impunity. The investigation into Comey is being conducted by his friend, conflicted “special prosecutor” Robert Mueller, whose closed-door proceedings serve to remind us of Nazi Germany’s clandestine SS. We need transparency. Sunlight is a disinfectant, none of which may be found in the bowels of Washington’s swamp where the likes of Comey, Clapper and Mueller reside.

Hillary’s book tour is deep cover for her campaign to undermine and contest the 2016 presidential election result. Is Hillary Clinton an enemy of democracy? Before her 2016 presidential election loss, Hillary stated, “We’ve been around for 240 years. We have had free and fair elections. We’ve accepted the outcomes when we may not have liked them and anyone who doesn’t is an enemy of democracy.” The hypocrisy is earth-shattering.

And it didn’t stop at Hillary. The New York Times reported, “In Obama’s remarks to activists, Obama urged them to stop moping and ratchet up their opposition to Mr. Trump by Thanksgiving. He promised to join their cause soon after, telling them: ‘You’re going to see me early next year, and we’re going to be in a position where we can start cooking up all kinds of great stuff to do.’” Obviously, this “great stuff to do” included enlisting Obama’s friends in Hollywood—friends who were regular guests in the White House at great taxpayer expense.

To that end, the Freeman film pushes the envelope on the propaganda war on America. Washington D.C.’s swamp and the elites living in New York and Los Angeles are enabled by the USA’s biased, fake-news liberal media and a cabal of Hollywood’s celebrities blowing the propaganda bullhorn for Hillary Clinton and Barack Obama’s deep-state shadow government.

This treasonous propaganda film’s attempt to overthrow President Trump and his administration undermines the republic’s basic principles of democracy, liberty, and free speech.