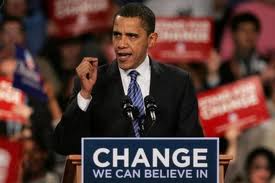 Obama’s an accomplished individual. Smart, cool, in control. But his standout quality is probably his ability to create euphoria. Create it, sustain it, ride it. Watch the people celebrating with him at his victory rally in Chicago and you could easily believe that the USA had just won a war or beaten a recession.

Unfortunately for Obama, reality doesn’t have much time for speeches. The economy was dire going into the election. Coming out of it, you can almost hear the engine failing.

Let’s take the first indicator of failure – the stock market. The market mood darkened in September and October, then dropped abruptly as news of Obama’s victory sank in. I don’t actually think that’s because Wall Street hates Obama. I think it’s more that as the election hoopla dies away, investors realise how little they can expect from the government, how bad the economic situation really is. And, for that matter, how bad the political situation is. The House remains solidly Republican, the Senate comfortably Democrat – and the whole divisive status quo guaranteeing gridlock for another four years.

Over the next few weeks, you’re going to hear a lot about the fiscal cliff. In January 2013, a whole lot of things happen together. George W. Bush’s tax cuts expire. A payroll credit expires too. Some automatic spending cuts are imposed across the board. (These last cuts, of course, aren’t thanks to some outbreak of sanity in Washington, but a bad compromise cobbled together in the course of 2011’s debt ceiling crisis.)

The fiscal cliff is huge, and real. Its impact is potentially around 5% of American GDP. By contrast, George Osborne’s fiscal tightening amounts to little more than 1% a year. If you want to get your head round what a comparable tightening would imply in the British context, then just imagine that the basic rate of tax increases by 10 pence in the pound overnight. Or that spending in the NHS is halved, again overnight.

No economy is strong enough to take that kind of punishment. The British economy is struggling to come out of a double-dip recession even with its own weak-as-milk pace of tightening – and, indeed, I think a triple-dip recession is highly probable. The fundamentals of the US economy are in some ways better than ours (less reliance on the finance sector, less proximity to European travails) but a 5% cut in economic demand overnight? The result will be crippling.

Although the US jobless rate has improved slightly in recent months, that’s only because dispirited workers have left the jobs market altogether. The US employment rate is a horror story. Piling a massive fiscal shop on top of those weak fundamentals, and you’re going to see a massive rise in unemployment. (If you look at U6 unemployment data for the US it’s hovering close to 15%, a shocking stat.)

You might think that the solution is obvious. If the fiscal cliff is so bad, then simply decrease the slope. Go for a slow-but-sure Osborne-style tightening so the budget deficit floats gently lower. And sure enough, there are plenty of economists, living comfortably in their ivory towers, who suggest just such a solution.

But that solution is not available. The IMF – hardly a sensationalist organisation – says that the elimination of America’s long run fiscal gap requires both a 35% increase in all taxes and a 35% cut in all entitlements. The fiscal gap is heinous, but it’s only the first step. It doesn’t even take America where it needs to go.

It gets worse. If fiscal policy can’t save America, how about monetary policy? Alas, and just like in Britain, monetary policy is all out of gas. Interest rates can’t go any lower. quantitative easing (QE) has reached its limits. (And, in any case, QE is little more than a way to rescue Wall Street at the cost of inflation for the rest of us.) The worst thing that could happen to America is that Ben Bernanke, the unelected Chairman of the Federal Reserve, tries to rescue things. The best thing that could happen is that he goes on holiday for four years, having left his Blackberry in the office. 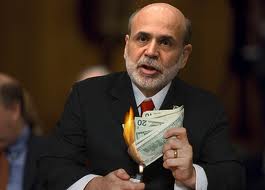 In short, America’s problems are profound and there is no way to deal with them except one that imposes huge short-term costs on the economy and the people. I don’t think it’ll get quite as bad as it has done in Greece – the US economy has a lot, lot more about it than that – but most of the pain still lies ahead.

And in matters of finance, everything is circular. So the government needs to raise taxes and slash spending to sort out its debt problems. The result: a huge reduction in demand and heavy job losses. The result: countless homeowners being unable to service their mortgages and a huge rise in ‘jingle mail’, as homeowners send their house keys to the foreclosing banks. The result: an already weakened banking system sinking further under a tide of ill-advised boom era lending. And of course, as all this happens, the economy will shrink, which means that the US government has to slash spending yet further in a desperate effort to keep its deficit reduction efforts on track.

These words might seem apocalyptic, but I’ve been saying these things for a while. (My book, Planet Ponzi, has the whole story, and it’s out in paperback now.) What’s more, we’ve already seen disaster scenarios such as these come true in well-managed countries of the developed West. Spain had a much lower debt to GDP ratio than the US. It had better supervised banks and less casino-banking. But we all know the state that Spain is in: a death-spiral that even Germany may not be able to help with.

And the signs are everywhere in America. Go-go stocks have lost their lustre. Facebook trades at little more than half its IPO price. Apple, for so long a do-no-wrong stock market darling, is down more than 20% from its recent highs. Businesses are hoarding cash, because they don’t dare invest it, don’t dare return it to shareholders.

I don’t suppose Mitt Romney thinks of it like this, but you could argue that the 2012 election was a heck of a good one to lose. America has outrun financial reality for decades now. Debt-fuelled, government-funded. The future bought on the never-never.

But the debts are falling due. Reality is knocking at the door. And the fiscal cliff is only the start.