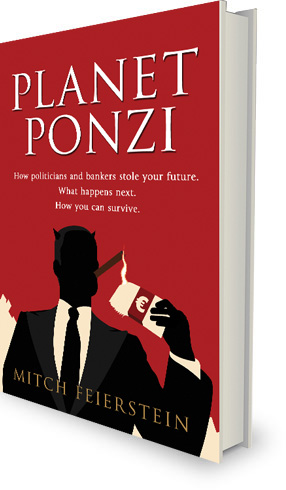 The ‘Credit Crunch’ is not over. In fact, it has barely started.

The world is now approaching the final death rattle of the greatest Ponzi scheme in history:  a scheme by which the financial industry created a vast overhang of debt, a mountain of low quality assets – and laid the foundations for a disaster which will dwarf anything else in history.

The turmoil of 2008-2009 merely resulted in the massive transfer of debt from the private to the public sector. We’re now paying the price.   But where will it leave us?  PLANET PONZI reveals the true debts of the US government, shows how close Italy is to following the way of Greece – and explores Britain’s own finances in grimly realistic detail. This is a roadmap to the near-future, essential reading for our times.

As a former member of the U.S. House of Representatives, prosecutor and veteran of one of the world’s largest global banks, I’m thrilled that someone like Mitch is using this megaphone to sound the alarm. It takes someone with his background to take us behind the PR spin and superficial headlines to discover the truth.
— Rick Lazio

Mitch Feierstein is one of the most prescient and cogent observers of the economic crisis that has engulfed the world. He delivers his controversial views without fear or favour and tells the truths others are too terrified to voice or desperate to hide. Feierstein has an insider’s knowledge of the markets and brilliant, iconoclastic intellect which he is not afraid to lose. If you want to understand the financial mess we are in now, and what is likely to happen next, you can’t afford not to read him.
— Ruth Sunderland, Associate City Editor, Daily Mail

It’s a description of how we in the West have given away our economic hegemony in a few short years – a sort of “How the West was lost” if you like.

Mr Feierstein outlines, in simple terms, the mistakes that have been made by global policymakers to leave us in a position where we in the West are massively under-competitive, over-indebted and ruled over by, in any truly objective analysis, bankrupt governments, flinging out potentially worthless paper to be gobbled up by investors who are clueless as to what they can buy instead. The description of a Ponzi scheme is very apt. And in a week when Moody’s moved the UK to a negative outlook, Mr Feierstein’s book is a reminder that things could well get a lot worse in coming years and decades.

— Julian Knight – Money editor of The Independent on Sunday