The first rule of capitalism: bad firms like RBS should be left to go bankrupt and criminals should go to jail

by Mitch Feierstein about 9 years 7 months ago 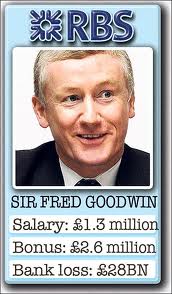 Crimes committed: why are no bankers in jail?

If you’re confused – if, by chance, you don’t remember authorising anyone to pick your pocket to give to charity – then welcome to the world of financial services. Here’s how it works. Greedy, irresponsible morons on huge salaries and inflated bonuses take RBS, one of Britain’s leading banks, and trash it to the point of insolvency.

Because Gordon Brown’s government forgot the first rule of capitalism – that lousy firms should be left to go bankrupt – you rescued RBS using your money, your savings, your taxes. You, along with your fellow British taxpayers, now own 82% of the bank. In a small way, you’re a world-record holder: the bailout of RBS was the world’s costliest bank bailout. Congratulations on that. (Though again, I’m not sure you had a choice.)

Now, unfortunately, it turns out that those same overpaid, irresponsible morons ran an institution in which the manipulation of interest rates was endemic. Manipulation which made money for them, the bankers, at the cost of ordinary members of the public. It’s pretty obvious what ought to happen. The people who manipulated rates should go to jail. The people who supervised them should either go to jail (because they too were conspirators in the fraud) or they should be disbarred from business forever (because they’re too stupid for anything complicated.)

But needless to say, that’s not what happens in Cameron-land, any more than it did in Brownania. No, what happens is this. RBS is fined. It’s paid £87.5 million to the Financial Services Authority and has made all the right noises about learning its lessons. (Fat hope.) 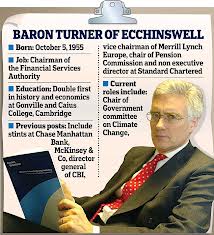 Lord Turner should resign immediately giving his pension to taxpayers who bailed out RBS !

But the thing is, you own the bank. So that fine hits you. It doesn’t hit the idiots who managed the bank. It doesn’t hit the fraudsters directly responsible for the manipulation. Now although that’s hardly good news, it would be almost OK, as long the FSA simply returned the money to the Treasury, so that in effect you’d have been paying the fine directly into your own pocket. But that kind of common sense offends those in government. So instead the FSA passed the fine – the one which you paid – to charity. So you now have the rare privilege of (i) having shelled out for the costliest bank bailout in history with no chance of ever being repaid, and (ii) having given £87.5 million to charity. Well done.

5 Responses to: The first rule of capitalism: bad firms like RBS should be left to go bankrupt and criminals should go to jail