by Mitch Feierstein about 10 years 8 months ago

Mervyn King of the Bank of England has one main job: to keep inflation at or close to 2%. This week – Tuesday – we’re going to see a new set of consumer price inflation figures and they’re not going to be anything like 2%.

My bet is that we’re going to see inflation race up to 5.3%. Bear in mind that the crude oil price has rocketed 30% in the last month, with a barrel of crude selling for $99.40 as of this morning. Those massive increases hit consumers at the gas station, but they also hit them everywhere else along the supply chain too. And of course it’s not just gas prices, it’s food and metals and lumber and pretty much everything else as well.

So King has one job and he’s not doing it. His punishment for failure? Nothing. He has to write what is now little more than a form letter to the Chancellor saying, ‘Whoops, sorry, global conditions have not been propitious.’ (You can see what one of those form letters looks like by going here.)

Now, I’m a tolerant guy. Sometimes global conditions are indeed hostile. I can see that sometimes a Central Bank might fail to achieve its targets. But the Bank of England is printing money like crazy. It’s already admitted that QE1 pushed up inflation, but now it’s doing the same again.

I would say that’s as dumb as pouring gasoline on a fire, only it’s even dumber than that. It’s pouring gasoline on a fire for a second time, even when you noticed that the first time you did so the fire grew bigger. And the guy in the photo (he’s a student at Central Bank Training School) is only using a watering can to apply the petrol. Mervyn King is throwing around £275 billion – money which is directly responsible for debasing the currency and adding to inflation. 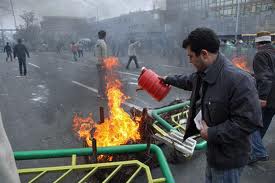 Here's a guy pouring gas on a fire.

Meanwhile, the euro collapses, Greece is denied a referendum, there’s a change of government in Italy that voters have had nothing to do with, British shoppers face ever-rising shopping bills. And the good news in all this? Well, some people are happy.