Numbers Never Lie — Central Bankers, Politicians and Lawyers Do — Is the Fed Conspiring Against Us?

The dual mandate of the Federal Reserve is a good one. It is charged with ensuring stable prices and maximum employment. That’s a good basic recipe, one which served the country well. 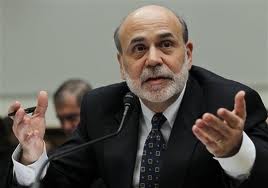 Ben, hope is not a trading strategy.

And notice what isn’t there. The Fed is not charged with distorting natural market pricing mechanisms to the point of perverting risk. It is not asked to promote ever increasing stock prices. It does not have to guarantee that property prices are rising. It is not asked to manipulate bond, equity or commodity markets. It is not asked to seek the profitability of ‘too big to fail/prosecute’ firms on Wall Street, or to promote their interests. It is certainly not asked to indulge in secret and complex financial transactions with no clear benefit to the wider public.

Yet evidence that the Fed may have lost touch with its mandate are mounting. Sometimes it’s the little things. The Fed is reported to have leaked the minutes of its FOMC meeting to a number of major banks, including JP Morgan, Goldman Sachs, Citigroup, Barclays and others. Within hours of receiving the data, Goldman Sachs issued a research note suggesting that clients short gold. It remains to be seen whether that note was based on the leaked Fed information, but Congressmen Alan Grayson and Daryl Issa are rightly seeking immediate clarification of the issue. Whatever the outcome of those investigations – and frankly the Fed’s record in this respect does not generate much confidence – it’s astonishingly inappropriate for such data to be transmitted to major Wall Street firms ahead of the market more generally.

But it’s the bigger things too. I’ve talked about the matter before on these pages, but one of the biggest scandals in recent American history should have been the way that, during the most turbulent phase of the current financial crisis, the Fed – secretly and without the knowledge or consent of Congress – placed vast amounts of taxpayer money at risk in the support of numerous banks, many of them foreign. The idea that unelected officials should dispose of more than a trillion dollars of your money without Congress even knowing is, to my mind, a greater abuse of democracy than the Watergate scandal. Watergate was bad enough, but it didn’t involve a trillion dollars.

And yet, I suspect that there are worse things yet to be uncovered. Suspicious indicators abound.

Then too, there’s the appalling conflicts of interest that are built into the system. The board of directors of the Federal Reserve banks are largely composed of officers of the very banks the Fed is there to supervise. So when crisis struck Wall Street, how was it a surprise that the Fed – supervised and directed by Wall Street bankers – was so fast to ride to the rescue?

And look too at the rise and rise of the stock market. Europe is in a slo-mo financial crisis. Japan (a country more highly indebted than Greece) has decided to devalue its currency and double up on its money supply in a massively risky gamble to get out of trouble. America is seeing weak growth and a rapid increase in the kind of toxic debt products that brought us to our knees five years back. Corporates are hoarding money instead of investing it. Jobs growth remains anemic.

So how come the stock market is rising? Who is the final buyer behind that rise if not those magic money-printing machines at the Fed? And if the Federal Reserve believes that rising financial markets are necessary to restore the country to health, we deserve an explanation of exactly how bubbling up financial assets to untenable levels is going to help with the things that actually strengthen economies: physical investment, innovation, new business formation, job growth.

It gets worse. The VIX is a measure of stock market volatility or simply put price movements up and down. It’s long been an interesting measure and has long had a part to play in financial markets. But it’s gone crazy recently. Trading in the VIX doubled from 2011 to 2012. The volume of futures contracts traded is up nearly 2000% since 2009.

I’m a hedge fund manager. I deal in these markets. And I have no idea which institution; private sector firm, sector or individual could be trading in these volumes due to the vast margin requirements (not least, because proprietary trading is now heavily restricted, at least in theory.) So could it be the Fed? And is its strategy to reduce price swings, influence and maintain the stock market’s otherwise inexplicable rise? I can’t be certain, but I think that the Fed should come out and publicly disclose any dealing or influence it has had in this area.

These questions go still. further What products and markets is the Fed trading in? The Fed has admitted to trading swaps with the ECB, which compels us to ask: which other off balance sheet derivatives is the Fed currently trading? Is the Fed active in gold swaps? Is it trading in gold, silver or other metals, futures and or options? Bear in mind, that the Fed’s leverage is so extreme that a small movement in prices could make them insolvent. And given that there’s no known exit strategy to their QE program, the risk of a disorderly exit with catastrophic losses is highly probable.

These are disturbing questions, and I’m not the only one asking them. David Stockman, Director of Management and Budget in the Reagan administration, looks at our current financial landscape and calls it ‘a giant Ponzi scheme’. He’s right. That’s why I wrote Planet Ponzi 2 years ago. Nobel Prize winner and former chief economist at the World Bank, Joseph Stiglitz, commented recently, ‘If we [at the World Bank] had seen a governance structure that corresponds to our Federal Reserve system, we would have been yelling and screaming and saying that country does not deserve any assistance, this is a corrupt governing structure.’ He’s right too.

All the evidence suggests that the Fed has turned into an entity which is too big to fail/jail/bail or prosecute, manages the financial system on behalf of Wall Street and is accountable to no one. That system delivered one huge financial crisis in 2008-09, but an even larger aftershock is brewing now. Isn’t it time we demanded some answers? Isn’t it time we demanded change?

2 Responses to: Numbers Never Lie — Central Bankers, Politicians and Lawyers Do — Is the Fed Conspiring Against Us?