Letter to President Trump: Audit and shutter the Federal Reserve!

by Mitch Feierstein about 5 years 2 days ago 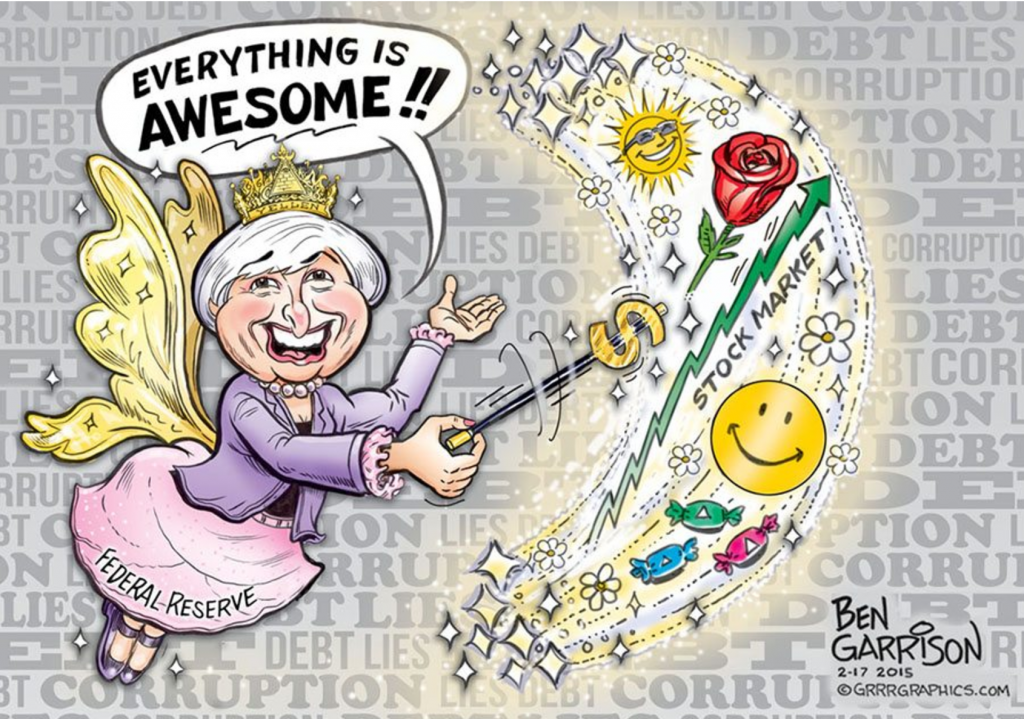 The Federal Reserve has a congressional mandate to achieve maximum employment and price stability. Nowhere in that mandate does it mention asset price, specifically stock market price, manipulation. But since the 2008 crisis, the Federal Reserve’s policies have targeted the inflation of irrational, unsustainable bubbles in the stock, bond and property markets.

Unfortunately, over the past 30 years, Federal Reserve policy has succeeded at two things:

1)    Creating history’s greatest wealth inequality gap: The rich get richer, the poor get poorer, and the middle-class become extinct. Recent studies show it will take around 230 years for the average black family to reach the same level of wealth white families have today. For Hispanic families, it will take 85 years. While the Federal Reserve, and global central banks in general, shriek about aggregate American incomes being above 1989 levels, the truth of the matter is that this is only applicable to the top 1% of income earners—while costs such as shelter, food, tuition, and healthcare for the remaining 99% skyrocket, making basic survival nearly impossible! As a result, most everyone in America, excluding the elites, gets screwed as usual.

2)    Inflating grotesque asset bubbles in the stock, bond, and real estate markets: Only twice before in history have stock valuations been as high as they are today. In 1929, before the Great Depression and in 2000, before the NASDAQ collapsed and dropped nearly 80%. Contrary to the current talking heads’ narrative, these valuations are a recipe for wealth destruction ending in financial disaster. As financial pundits and stockbrokers continue their “it’s different this time” mantra, let me warn you, folks—it is not different this time. It is never different—this time, next time, or any time. History always repeats itself. You cannot defy the laws of gravity and when these bubbles burst, many people are going to be destroyed. And it’s not just in the US. Central banks have injected over $4 trillion worth of liquidity into markets so far in 2017. The Swiss National Bank is one of the biggest holders of Apple shares. Companies like Snapchat have seen valuations as high as $52 billion, even though they make no profit, and it’s unlikely they ever will. Tesla’s valuation is bigger than General Motors and Tesla’s cash burn is phenomenal, unsustainable, and they make no profits! Facebook is valued at over half a trillion. Contrary to this new normal fantasy, earnings do matter.

Federal Reserve Chairman Janet Yellen and the rest of the governors must be held accountable and take responsibility for their mistakes.

In 2014, Yellen told us that the more than 50% collapse in oil prices, trading from over $100 per barrel down to the $40s per barrel, was transitory. Yellen was wrong. In June 2017, Yellen told us falling inflation was transitory. Again, Yellen was wrong. In fact, over the past 12 months, the energy sector is down several percent, the S&P is up 16%, and the NASDAQ is up 22%. The 12-month percentage change in the Consumer Price Index remains at lows not seen since Feb. 2015.

Yellen has repeatedly maintained that the Fed’s policy decisions would be data dependent, but this has not been the case. The Federal Reserve has claimed tightness in the labor market is transitory, but this transitory narrative has been going on for more than eight years. It is a false narrative based on bad data. The official unemployment numbers do not accurately reflect the state of the labor market because they fail to include the participation rate, which hasn’t been this bad since 1977.

Chairman Yellen has even blamed the opioid crisis for distortions in the labor markets, without taking responsibility for the policies that have resulted in the opioid crisis. The middle class have not earned a fair share of wages as a percent of GDP since the 1980s and are now turning to opioids to escape the physical and psychological pain being inflicted upon them by not being able to achieve the American dream.

Yellen’s mission-accomplished moment recently occurred when revolving credit and stocks both skyrocketed to new all-time highs. Total outstanding consumer debt now exceeds its 2008 peak at $12.9 trillion. The Federal Reserve’s policy missteps enabled the American public to accrue more debt than they can ever repay. Global debt has increased over 50% since the 2008 credit crisis thanks to central banks magically printing hundreds of trillions of dollars out of thin air. Real debt and grossly overvalued assets lend themselves to Ponzi schemes. The result when Ponzi’s collapse: overvalued assets disappear and the debt remains! 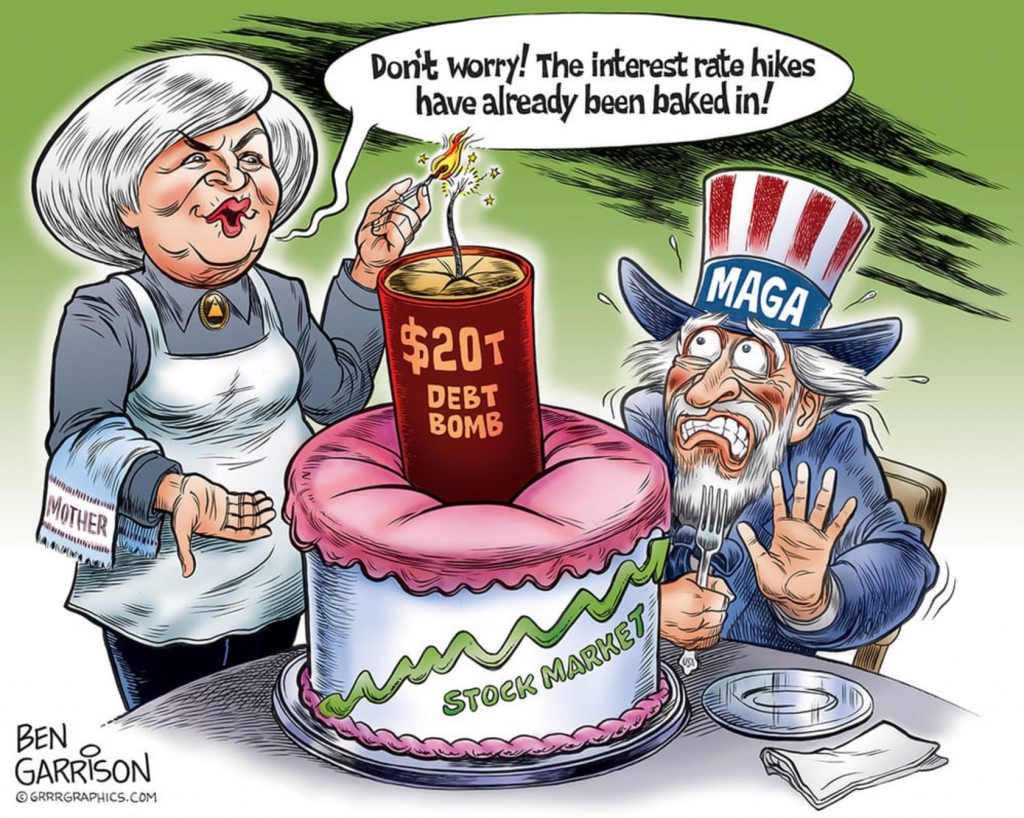 And it’s not just individual debt. The total debt owed by the United States is more than $250 trillion. This debt can never be repaid. Debt is not a bad thing if it’s used for infrastructure development or to create opportunities, employment, and growth, but it is terrible when used to create heinous weapons of mass financial destruction by creating synthetic derivative products that use leverages of 500 to 1, meaning that $1 million can control $500 million. Most of this debt was accrued in the past seven years when interest rates were at historic lows. So if rates were to normalize, revenues would not be able to cover the interest payments on the government’s debt.

Despite the Federal Reserve’s rhetoric that they are going to increase interest rates and shrink their nearly $5 trillion balance sheet, the coming economic recession or stock market collapse will force the Fed to implement a new policy of quantitative easing and implement negative interest rates at which point policy failure will become evident to everyone. These policies failed in Japan, but what lessons did we learn? None! The Emperor will be revealed as naked and the financial crisis will be exacerbated by continued policy mistakes. Action will finally be taken against the Federal Reserve but once again it will be too late.

And the governors know there is trouble.

The latest rat abandoning the ship is Federal Reserve Vice Chairman Stanley Fischer, whose resignation becomes effective in mid-October. Fischer likely knows the Federal Reserve’s policy missteps will cause the next financial crisis and is trying to avoid massive reputational risk.

And the coming crisis will likely bring down the entire global financial system.

The Federal Reserve was set up in 1913. The time has come to audit and shut down the Fed, which operates on behalf of its member banks and not Americans. When the next financial collapse happens, it will be the responsibility of the Federal Reserve, but it will be too late for us to do anything about it. The Washington DC swamp is allowing plunder on a massive scale by the member banks involved with Federal Reserve policy that is designed to enrich the .01% they serve while screwing the rest of America for the next several generations.