by Mitch Feierstein about 10 years 3 weeks ago

Facebook is a phenomenal company. Mark Zuckerberg is a remarkable man and an astonishing entrepreneur. He’s created something sensational — something genuinely world-changing — and he’s young enough to be my son.

But Facebook the company is one thing. The mooted valuation of Facebook is quite another. I admire the first, and hate the second.

Let’s start with some facts. Facebook enjoyed first quarter revenues in 2012 of $1.058 billion. Those revenues are up around 45 percent from the same quarter in 2011. They are somewhat down on the company’s fourth quarter, but Facebook is (strangely enough) a seasonal business, with a strong fourth quarter and a quiet first one.

But that’s revenues, and investors care about profits. And, remarkably, Facebook’s first quarter profits (of $205 million) have dipped, both in relation to the previous quarter and in relation to the same quarter in 2011. Any dip at all should send a screaming ‘wait up!’ message to potential investors. The company’s putative valuation has been set as high as $100 billion: a figure which is more than 25 times 2011 revenues and a straight 100 times 2011 profits.

Those valuations are dizzyingly high. They’d be justified only if the company’s top line was growing exceptionally fast, if its bottom line were growing equally fast, and if the risks to the company’s business model were modest and controllable. Not one of those things is true.

Sure, a 44 percent increase in revenue is one heck of an increase, but it’s a lot smaller than Google was achieving at a similar stage in its lifecycle. (That firm regularly notched up revenue gains in excess of 100 percent.) What’s more, Google’s profits were growing at the same crazy rate. Net income grew steadily as a proportion of sales. There weren’t any downturns, just extraordinary growth.

Furthermore, you’d have to be nuts to forecast vast revenue growth for Facebook. The firm already boasts almost a billion users. Where is its ongoing growth going to come from — Mars? Saturn? Now, for sure, a firm can get smarter about the way it conducts its business.

Zuckerberg has, quite correctly, chosen to focus on capturing growth in users ahead of growth in revenues. As the firm starts to turn its attention to maximizing receipts per user, its results should show some improvement. But predicting a rosy future for a well-managed company with a remarkably dominant position in its niche is rather different from valuing the firm at a hundred times last year’s profit data. (By contrast, a ‘normal’ valuation would be more like fifteen times.)

What’s more, recent news has already revealed some of the possible cracks in the Facebook edifice. The firm just paid $1 billion for a firm, Instagram, that had no revenue. It didn’t even have any remarkable software. In the scathing words of Stephen Vaughan-Nichols at Computerworld magazine, “I haven’t programmed in years, but I bet I could put together a team of developers, whip up an Instagram clone, and launch it on the Amazon Elastic Compute Cloud over a weekend. This is not rocket science.”

Indeed. This is neither rocket-science nor business-science. It looks an awful lot like a company so concerned about losing its users to possible rivals that it will pay any amount of money to defend itself against competitive threat. That still doesn’t mean Facebook is a bad company — it’s not; it’s a very good one — but it does mean that anyone assessing the firm should regard it as vulnerable to threat, not immune from it. It’s a MySpace, not a Google.

Now the weird thing about all this is that everybody knows it. Indeed, Facebook’s own S-1 IPO document is brutally candid about the risks. “We expect our rates of growth will decline” and “Unfavorable media coverage could negatively affect our business.” “Competition presents an ongoing threat to the success of our business… We may not be successful in our efforts to grow and further monetize the Facebook Platform.” You can’t possibly say they’re not spelling out these (and other) dangers in language of the utmost clarity.

There’s a further danger too. Investors will not control this company: Mark Zuckerberg will. He’ll have acontrolling majority of the Class B-shares, so that investors will not be able to determine leadership or strategy. Now I admire the kid hugely, but he is only a kid and even the most experienced business geniuses can mess things up. Investors need to have the right to hire and fire top management. In Facebook, they won’t have that right, yet no discount is visible in the pricing.

Finally, investors can hardly be unaware of the risks of bubbles forming in the tech sector, above all. I’ve reproduced below the rise and fall of NASDAQ around the dot-com bubble. From a low of sub-1500 in October 1998, the index grew to a peak of more than 5000 in March 2000. Just four years on from 1998, the index stood back at 1140 — or less than a quarter of its peak. 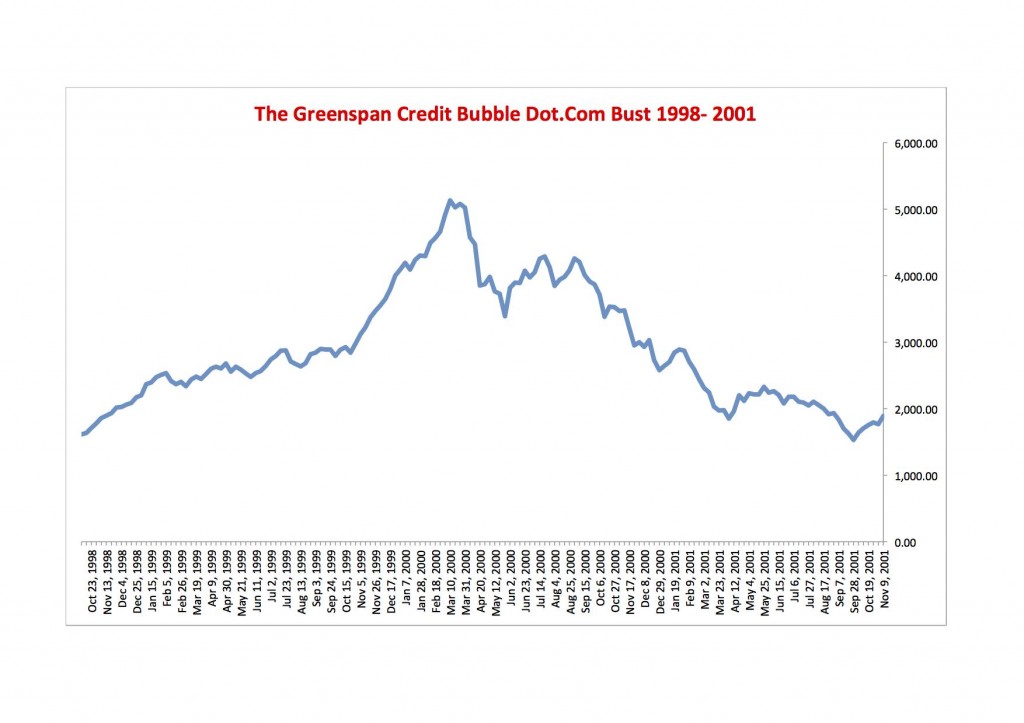 All this raises a question. If Facebook is a fine firm, but vastly and obviously overvalued at the levels currently being discussed — if it’s also obvious that this sector is dangerously prone to excessive valuations and vertiginous slumps — then why on earth is anyone contemplating launching the shares, or buying the shares, at these levels?

The first part of the answer is that the sellers are holding the megaphone. If, like me, you’re not interested in buying stock in an overvalued firm, your easiest course of action is to do nothing. You don’t need to go public with your views or concerns in any way. If, however, you work in one of the cluster of firms currently surrounding Facebook (a cluster which includes most of Wall Street’s finest: Goldman Sachs, JP Morgan, Morgan Stanley, Deutsche Bank, BofA Merrill Lynch, Citigroup et al.), you have a huge incentive to boost the price to the very limits. Your fees, your bonus, will be a slice of the takings. Since those fine firms dominate the markets — and dominate much of the analysis of the markets — it’s hardly surprising that investor sentiment around Facebook is routinely portrayed as bullish. You’ve got all of Wall Street on the one hand, a few empty desks on the other.

Secondly, though, one has to name the Federal Reserve as a co-conspirator or even lead-conspirator. Over the last fifteen years, the Fed has responded to every economic setback by loosening monetary policy. The NASDAQ bubble we noted above was inflated by the Fed’s monetary easing following a financial crisis (in Asia) and a Wall Street bailout (of LTCM). The subsequent dot-com collapse was followed by further slackness from the Fed, which led inexorably to the rise and fall of the housing bubble. That collapse in turn has led to a loosening of policy so extreme that the Fed’s monetary policy can only be summarized as, ‘You want some money? Have some.’

And so we’re in the bubble-inflation phase once again. Because of the cumulative damage wreaked by previous blunders, this is a feel-bad bubble — the grand culmination to the previous disasters. This bubble sits alongside sluggish growth, high unemployment and incipient depression. But you don’t judge valuations by how you feel. You judge them by the math. And terrific company though Facebook is, you should keep your wallet firmly in your pocket when it comes to the IPO.

The company is great. The valuations are farcical.

One Responses to Farcebook: A Stratospheric Valuation