Britain On The Brink

Sort of a good news, bad news week for David Cameron. (I’ll tell you about the pictures in a little while, but first things first.) 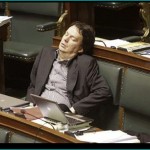 The bad news for Cameron: no one in Europe likes you. No one wants to invite you to their party. They don’t care about your City of London. Nicolas Sarkozy would like to stomp on your face in his Cuban-heeled boots.

The good news for Cameron: no one in Europe likes you. No one wants to invite you to their party. But given that the roof of their party-shack is currently falling in, the floor is rotten and the creditors are at the door, it’s not really a great place to be right now. Monsieur Sarkozy’s boot heels threaten to go straight through the ratings floor ending up at, oh, let’s say AA flat.

If you’re at all uncertain about the costs of being a Euro-insider, consider these figures. 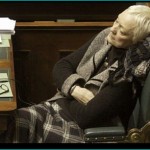 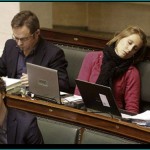 Yep, got some real tough thinking to do

In a nutshell: Spain has a lower government deficit, lower government debt, a government committed to austerity – and the nation pays 4% more for its funding than Britain does. There are real, substantial benefits of being part of the EU, but those costs are simply horrendous. Given that access to the EU’s market is now guaranteed by the WTO (World Trade Organization) it has become a genuinely open question as to whether Britain benefits from the EU in the way it once did.

Exiting the EU, or standing clearly on a single-market-only periphery would return much of Britain’s sovereignty. Britain is still one of the three most significant economies in Europe and is simply too important a trading partner for eurozone members to ignore or disadvantage. Sure, the UK will need to make sure that Ireland is solvent (because too many of Britain’s banks are exposed to that country), but as for southern Europe – Cameron and Osborne can calmly say that those problems are for others to sort out. Given the scale of the mess down there, that’s a happy position to be in. 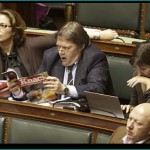 Maybe I'll find the answer in this, um, political magazine

Oh – and I owe you an explanation of these pictures. Well, if Britain is slowly shuffled onto the EU exit ramp, the country would be losing the services of these fine European legislators, photographed hard at work one workday afternoon.

It might delight you to know that these guys earn €12,000 a month. Which is €144,000 a year. And of course there are expenses on top of that, ones which are both notoriously lavish and notoriously ill-monitored.

If that’s what life’s like at the European party, maybe Britain is right to stay well clear.

One Responses to Britain On The Brink