by Mitch Feierstein about 5 years 8 months ago 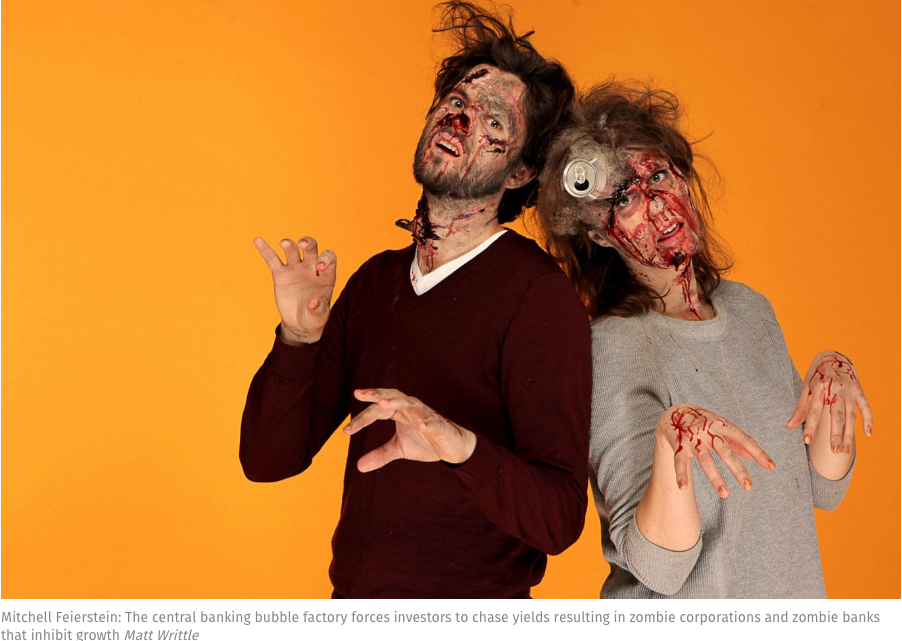 It’s different this time, or is it? The US Federal Reserve, the Bank of England, and the European Central Bank have become gargantuan, out-of-control, rogue hedge funds. Global central banks have magicked-up hundreds of trillions of dollars in debt and guarantees. Global stock market valuations are stratospheric—buoyed by stock buybacks, funded by record corporate debt, and enabled by reckless central bank zero-interest-rate policies. In fact, the European Central Bank’s purchase of massive amounts of corporate debt is pouring petrol on this blaze.

In 2013, the BoE’s “swerving Mervyn” was replaced by Canadian Mark Carney. Carney promised “forward guidance,” “escape velocity,” and “macro-prudential policies” that would drive the UK’s economy forward by “controlling the business cycle—ending boom and bust.” What he delivered was policy failure. Carney instituted polices that specifically avoided regulation, resolution, and restructuring of toxic assets. This policy direction will end in a UK economic collapse.

Mark Carney and George Osborne used the levers of monetary policy to distort market-pricing mechanisms and normal price signals. As a result, insurance companies and pension-fund portfolios were loaded to the gills with “risky assets” that will bankrupt them when, not if, markets normalize. The manipulation of asset prices, the use of fear to influence the BREXIT referendum vote, and the lobbying around climate change issues present clear evidence that the BoE is anything but “politically independent.” The policies pursued by Carney are clear abuses of the BoE’s mandate. These actions are farcical and the BoE must be reined in.

A nonelected, Canadian BoE boss trampled the myth of the Old Lady of Threadneedle Street’s independence. Carney loaded the BoE’s Monetary Policy Committee with likeminded apparatchiks—creating an idyllic “groupthink echo chamber” to rubber stamp misguided policies that keep the UK’s asset bubbles frothy. Carney’s reward for all of this? A contract extension through 2019. What could possibly go wrong?

Carney’s actions have resulted in a UK commercial and residential property bubble that is ripe and ready to explode. In Chelsea and Kensington, property transaction volumes have plummeted. Prices have collapsed nearly fifteen percent in November as property agents quietly close shop and sack employees across London.

Have the BoE enabled grotesque bubbles in the bond, stock, and property markets or the eight years of “temporary “emergency measures” and zero-interest-rate policies created infrastructure investment? Job creation? Savings? No, no, and no. It has killed savers, students, and seniors while generating record bonuses for CEOs. While earnings may have peaked nearly eighteen months ago, stock prices keep bubbling and wealth inequality continues to surge to new record highs—along with homelessness and underemployment.

Will Carney blame BREXIT, Putin or Trump for the upcoming problems? Why not? Certainly, extreme valuations enabled by the BoE recklessly allowing debt, credit, and leverage to skyrocket out of this universe had nothing to do with the coming collapse; nothing to see here, look away.

It is not only the UK but also global Central Bank policies that have broken our financial system beyond repair. The world’s oldest bank, Banca Monte dei Paschi di Siena, founded in 1472, 544 years ago, is now an insolvent zombie bank—thanks to the handiwork of JP Morgan, Deutsche AG, and Nomura. These companies sold Monte billions of dollars’ worth of derivative trades the bank did not understand. This predictably exploded leaving the bank bust. JP Morgan, Deutsche AG, and Nomura all made a fortune—and Monte’s shareholders, depositors, and EU taxpayers will get slammed with the massive bailout tab. The new normal is a world of financial fraud where the only rules which apply are too big to fail, bail, or jail and too connected to prosecute—steal all you can, while you can with impunity.

After the financial crisis, I wrote extensively exposing the banking industry’s toxic “culture of fraud” at Deutsche AG, JP Morgan, Goldman Sachs and the UK’s RBS, Lloyds, and Barclays. So what was done? Can you guess the number of bankers that have been jailed for the numerous frauds committed during the “Great Financial Crises”? Zero. That’s not capitalism! Capitalism doesn’t have zero accountability or zero transparency. This is ethically, financially, and socially wrong. Much of it is also, in my opinion, illegal and should be punished by long jail terms. No need for new regulation, we need to enforce existing regulations rather than repeatedly turning a blind eye.

Market manipulation by central banks has destroyed price discovery in every asset class and market. This has crushed the basic concept of capitalism. Central banks now pick winners and losers rather than letting free markets decide. The Swiss National Bank holds $140 billion in stocks, including shares in Apple, Google, and Amazon. Valuations, growth projections, and normal business cycles are all unnecessary. The central banking bubble factory forces investors to chase yields resulting in zombie corporations and zombie banks that inhibit growth, infrastructure spending, and the creation of productive assets. Reckless central bank policies have caused mal-investment en masse as the risk of a zombie failure is grossly mispriced.

“Insanity is doing the same thing over and over and expecting to achieve a different result.”- Albert Einstein

Our elites, the pay-to-play politicians, and their lapdog corporate media will never allow any changes to the status quo or a disruption to the “illusion of democracy.” The logic behind this is the belief that the wizards and warlocks at our central banks will bail us out by doing “Whatever it takes.” Unfortunately, this won’t happen. We are approaching a collapse of the global financial system that will make 2007–9 look miniscule. Capitalism without bankruptcy is like Catholicism without hell. And right now, we need to audit and abolish the US Federal Reserve, the Bank of England, and the European Central Bank, which started this mess, and slay the zombies.

Desperate times call for desperate measures; we need to create a “new global banking paradigm” pivoting far away from the West’s broken models which rely on the same PhD economists, academics, and government bureaucrats who have destroyed our global financial system and capitalism and replaced it with a combination of Keynesian economic Kool-Aid and central bank “new normal” Marxism.

My sleeves are rolled up; when can I start?

4 Responses to: Abolish central banks and slay the zombies